Shortly after I created my Sesame Street Nesting Dolls, I had ideas of making other versions. One that came into mind right away were Disney characters! So I ordered another set of blank wooden nesting dolls from Amazon and finally got work on them :o) These nesting dolls are smaller than the ones I used for the Sesame Street characters. Just an ordering mistake on my end. I recommend getting larger dolls because they are easier to paint.

First, print out pictures of the characters faces (I just googled until I found images I liked). Tape them onto the blank nesting dolls and with a ball point pen, trace the faces. For the smaller dolls, I found that using the tip of screw/nail was easier to trace with than the ball point pen. When you take off the paper, you will see that you have created an indent of the face on the wood doll. You now have nice grooves and lines to paint over. For the larger dolls are started by painting inside the lines, but for the smaller dolls, I started by tracing over my lines with black. If your paint brush is too large, try using a tooth pick. I used acrylic paint in a few standard colors and mixed to make the pinks and purples. The nice thing about acrylic paint is that it dries fast and is very forgiving. If you mess up, you can just paint over it with another color. When the acrylic is completely dry, I used a Triple Thick Brilliant Brush-On Glass Glaze to seal it and make it shiny. You only need one coat of this gloss and it doesn’t leave a sticky residue. As an afterthought, I decided to add on ears for Mickey. I used two pieces of cardboard cut with a 1″ punch cut, hot glued together for each ear. I cut a small curved notch out of each ear so they would sit nicely on the head of the nesting doll, painted them black and hot glued them on. You might also try using small wooden circles for ears. And there you have it! Mickey, Minnie, Donald, Daisy and Pluto for your little Disney fan to play with! Want to see more kids crafts? Follow along on my Repeat Crafter Me Facebook page to see sneak peeks of what I am working on! 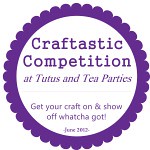